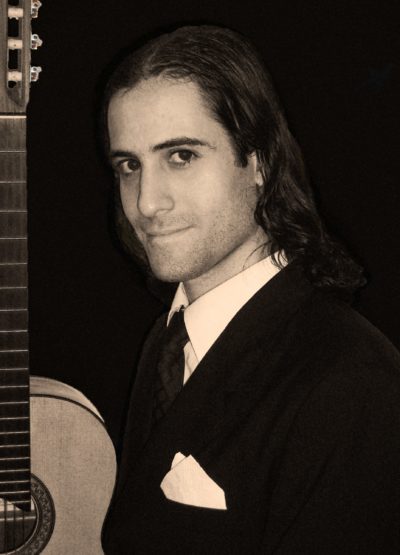 CAMILO VERGA was born on October 29, 1982 in Buenos Aires, Argentina. He began his studies with Cristina Dueñas in the Music School at the National University of Cuyo in Mendoza and completed the Undergraduate career in 2000. Continued as student of Graciela Pomponio and in 2006 is graduated Bachelor of Musical Arts (Classical Guitar) with full marks at the Carlos Lopez Buchardo National Conservatory (IUNA) of Buenos Aires, under the tutelage of Javier Bravo.

In 2010 received the advanced course the Accademia Chigiana in Siena, Italy, which he joined through admission test and where he was distinguished by Maestro Oscar Ghiglia with Merit Diploma and a scholarship for study. In the field of composition is guided by Fernando Maglia.

He received awards at competitions as well as guitarist and for their works. Among  its 17 international awards, is highlighting the First Prizes in interpretation in Aranda de Duero (Spain, 2012), César Cortinas (Uruguay, 2008) and Northlands College of Buenos Aires (Argentina, 2006). His Sonata Onírica was won Second Prize in the contest Claxica (Italy, 2013).

Complete Works for Solo Guitar (2010). Previously, between 2006 and 2007, he participated in the recording of two CDs as a result of the awards in competitions and other at live concert produced by the Argentina Guitar Circle.

Currently have plans to recording a new CD with his guitar works, thereby merging the role of composer and performer.

Since 2008 he teaches classical guitar at the National Conservatory (now the Music Department Carlos Lopez Buchardo – UNA) and from 2009 at the Manuel de Falla Conservatory of Buenos Aires.

– Selection as Participant, XXXVI Luis Sigall International Competition (2009, did not attend the event)

– Program Segovia a Yupanqui, National Classical Radio (August 31, 2014): “No wonder the album release Molto Legato because Camilo is an artist who is always looking for new challenges. In works such as the Gran Jota Aragonese range of techniques and timbral possibilities that stands out. When one listens to Camilo and has him at one meter, you can realize the great technical innovations that have, and not only that, but the great musicality. Because it is not only a pyrotechnic artist, these works fit too well because it has a unique technique while know what to do with it, “Fabio Caputo Rey and Sebastian Dominguez – La Gaceta de Tucumán Journal (Argentina, September 26, 2014)

“Molto Legato meets milestones guitar though, according to the virtuosity of his interpreter, seem chosen peaking at high technical requirement (…). If you have already demonstrated high artistic aspirations in their previous album, this proposal seeks to open the doors of their work to new audiences without giving up quality “

Molto Legato album review. “With a clear sound and precise phrasing the artist releases a tight delivery and precise musical architecture. The CD clearly meets the didactic function that the musician is proposed with this production of guitar classics. The performer is definitely a great concertist”

– David Qualey, composer (USA), for the execution of his work One Time Swing (February 2014)

considered that he interpreted a more balanced the whole program and attracting the interest and attention of the jury throughout his performance”.

“Camilo Verga it is extremely musical and his tone and technique are top notch. Nicely sensitive playing!”

“The General Directorate of Cultural Affairs certifies that the tour will be Argentine musician Camilo Verga in Italy, Germany, Austria and Spain between July 2 and September 7, 2010, is considered by this Directorate-General of high artistic and cultural interest, taking into account the prestige and trajectory of the aforementioned artist”

Verga guitar concert by its brilliant concert in this institution of November 13, 2010 as part of the Night of the Museums”

“He transformed the complex into the simple, added a feeling and a fine interpretation to the study of Villa-Lobos”

“Finesse, originality and mastery. Tárrega’s work was played in an exquisite manner. He is a first-rate guitarist” – Nilda de Urquiza

“Managed arpeggios and pleasant melody with technical and expressive quality, he entered resolutely in complex passages and came out with the quality of a dedicated and consummate artist” – Manuel Aracri