In 2015 for some of the participants of INTERNАTIONAL MUSIC COMPETITION 2015 — Belgrade, Serbia production center MIR Production www.mirproduction.com identified prize fund, one of the owners of which became participant from Nizhny Novgorod absolute winner in the nomination “Flute” and a participant of the Masters Final – Maria Filippova.

As a prize for her organizers gave her the opportunity to participate in the International Festival “Music – the road to life”, which took place in Kostroma, Russia.

Maria Filippova for three years in a row (2013, 2014, 2015) becomes the absolute winner of “Flute” nomination of the your competition (Belgrade, Serbia). And this year for the first time became one of the owners of the prize pool. MARIA FILIPPOVA was born on October 3, 1999. She began playing the flute at the age of 7 at the Children’s Musical School №3 of Nizhniy Novgorod in the class of Elena Zhelikhovskaya.

During her studies Maria became a laureate of the regional, all-Russia and international competitions more than once. Maria has taken part in numerous competitions with great success, such as:

– Diploma of the Semifinale of the 10 International Russian Rotary Children Music Competition (Moscow, 2012)

Prize for the best performance of the obligatory composition and the EMSY prize.

Maria is a holder of the City personal scholarship for gifted children, regional Pushkin scholarship , her name was listed into the encyclopedia “Gifted Children – Future of Russia” in 2011.

Participation Maria Filippova at the International Festival “Music – the road to life.”

For the fifth year in a row on the banks of the Volga River in the Kostroma (Russia) takes place the International Festival “Music – The Road to Life”, which held under the guidance of the Kostroma Symphony orchestra under the conduction of Pavel Gershtein”. http://www.kostromasymphony.ru/?lang=ru 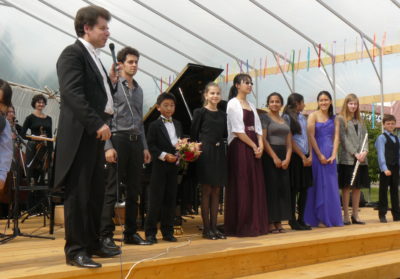 This year on the festival participated the winners of the American Fine Arts Festival (art director – Vladimir Agilin) from the US, Canada, Colombia and Costa Rica, including – Maria Filippova.

During the festival was held four concerts with the soloists – winners of international competitions, 15 young talented musicians from the United States, Canada, Costa Rica, Colombia, Nizhny Novgorod, Kostroma and Sevastopol. Maria Filippova took part in a concert at the Kostroma Philharmonic and in the gala concert, which took place on a summer stage in the village Rusinov Krasnoselsky of Kostroma region, where she performed “Ballad” of Frank Marten, accompanied by Kostroma Symphony Orchestra conducted by Paul Gerstein. All concerts had a great success. Creative inspiration of young musicians, a great work of the orchestra and the conductor, open-air stage on the banks of the Volga, turned into the natural decoration – all this has become for listeners and participants of project key to the bright, unforgettable experience! But besides great music and musical experiences children enjoyed close relationship which helped to make new friends, learn about life in other countries. Production center Mir Production is continuing distribution of the prize fund and by the end of 2015 year will soon appear information about the other participants, who became its owner.

Mir Production with such a distribution of the prize fund helps talented young musicians, some of the participants of the INTERNАTIONAL MUSIC COMPETITION 2015 — Belgrade, Serbia in promoting their music career, professional growth and opens for them new horizons in the music world.