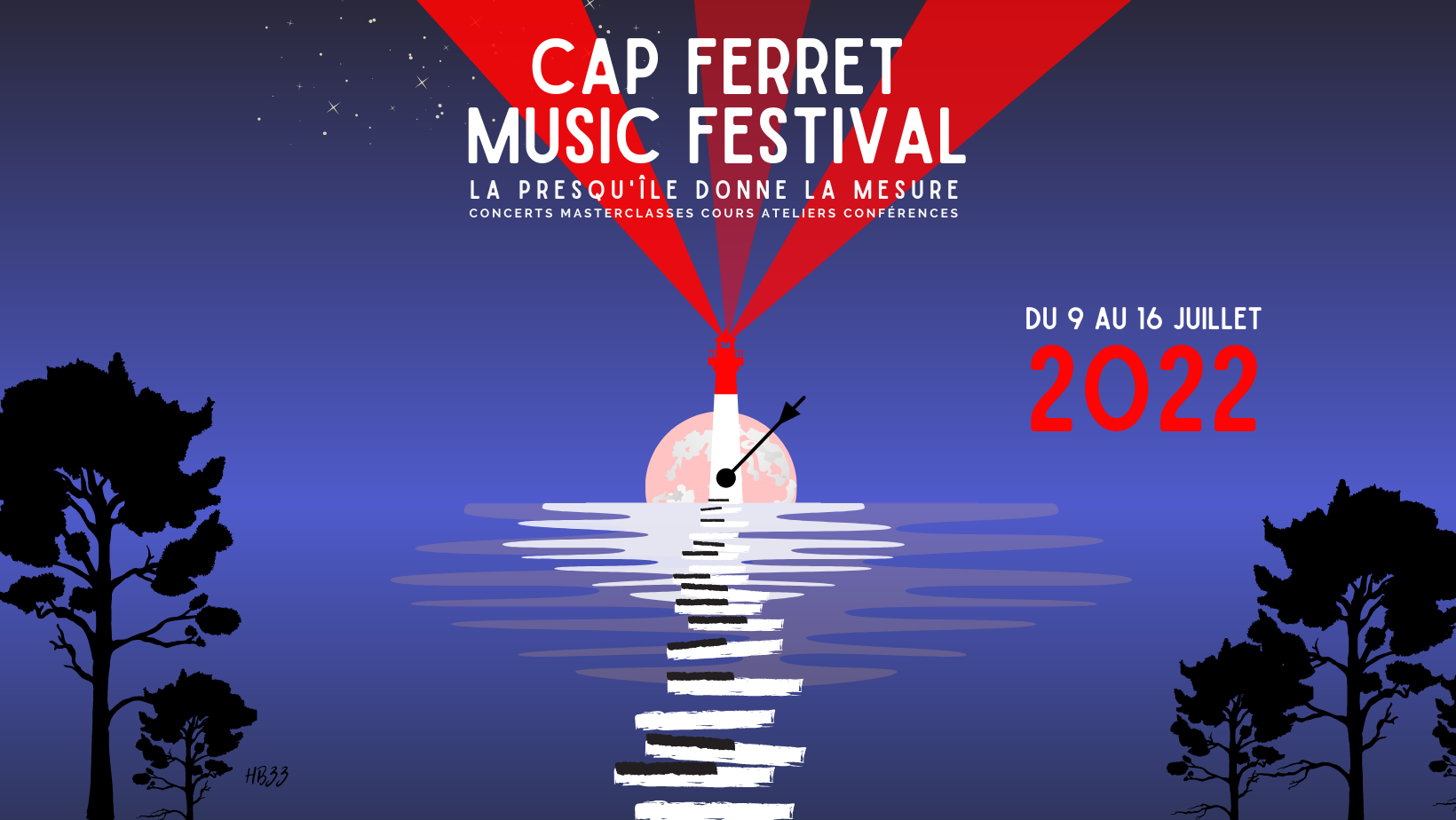 KATERINA TRUMPESHOVA from the Czech Republic became the absolute winner in the Oboe nomination, participant in the Masters Final and аs a Grand Prize, she received an invitation from our jury member, HELEN BERGER, to participate in the Cap Ferret music festival (France), which was held from July 9 to 16 2022.

Here are impressions from Kateřina Trumpešová…

My name is Kateřina Trumpešová, I am oboist from Czechia studying Hochschule für Musik Nürnberg, Germany in the class of Prof. Clara Dent-Bogányi. Last year I received the Grand Prize in the World Open Online Music Competition. I am very thankful for the prize fund and to member of the jury, pianist Helene Berger, for the award in the form of an invitation to the Cap Ferret Music Festival 2022. Little did I know how inspiring experience would be for me.

Right after my arrival to Cap Ferret in France, I got a huge portion of music. Driver from the organization brought me from the airport right to the Youth talent concert of pianist Zvjezdan Vojvodić, the overall winner of the competition. His playing was powerful and evocative. I also met my host family there, as well as other participants, many with whom I later developed a valuable friendship. The same evening was continued with a majestic opening concert at the beach, combined with fireworks. The next days I fully realized how richand interesting the program of the festival is. During the day there were different masterclasses. Every evening started with a concert ofYoung talents concert at beautiful chapel Chapelle de l’Hebre, and then ended with a Grand concert, always at different place in Cap Ferret. 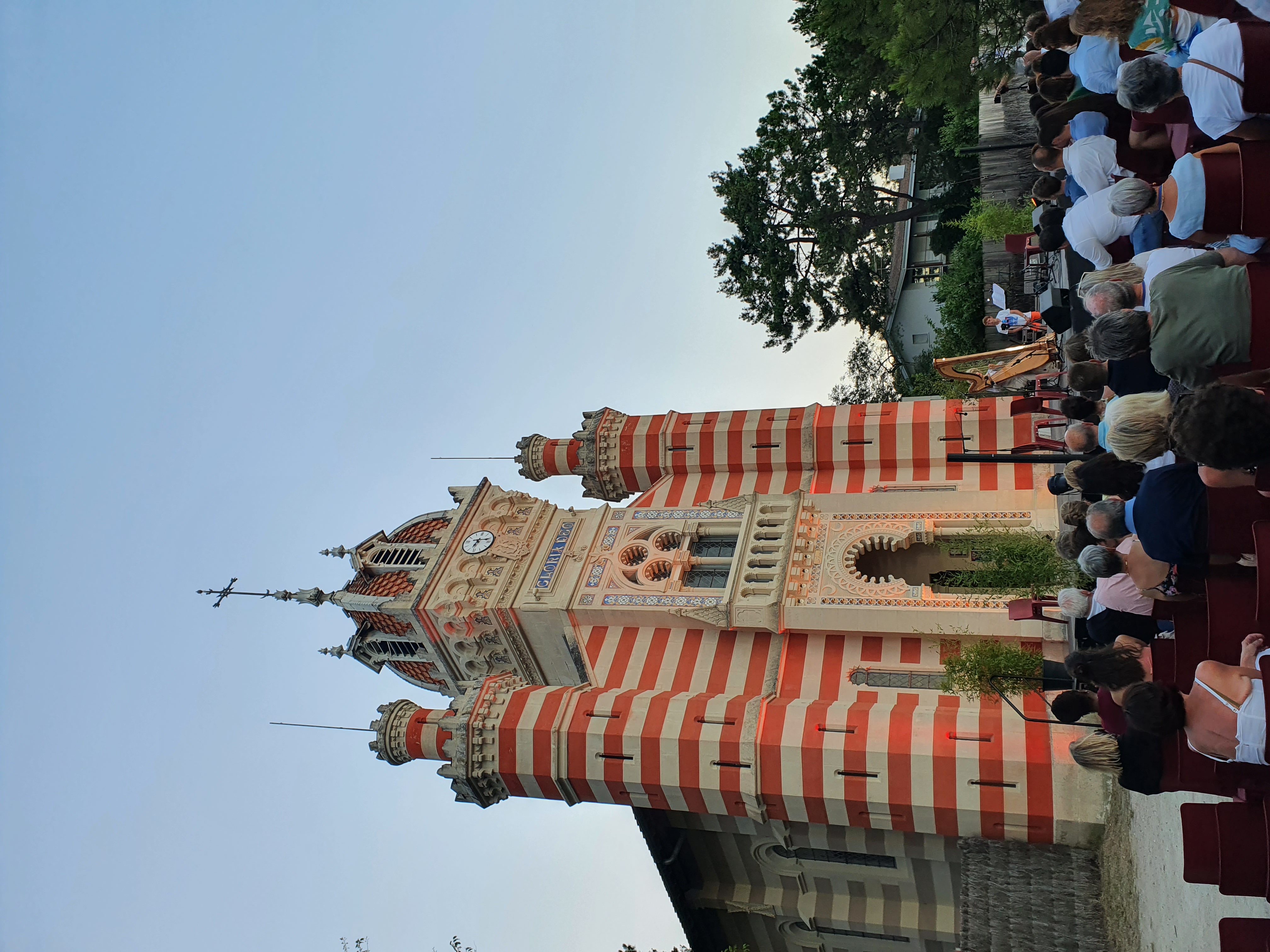 There was no oboe teacher having a masterclass, but that doesn’t mean that there was nobody to help develop my musical abilities! I was “adopted” into the harp class by inspiring harpist Lisa Tannebaum and I must say, that it was for me very interesting and helpful to work with a non wind player. Lisa’s musical thinking comes from her expertise with the harp, and so she brought a fresh perspective of the possibilities of the oboe in collaboration with the harp. 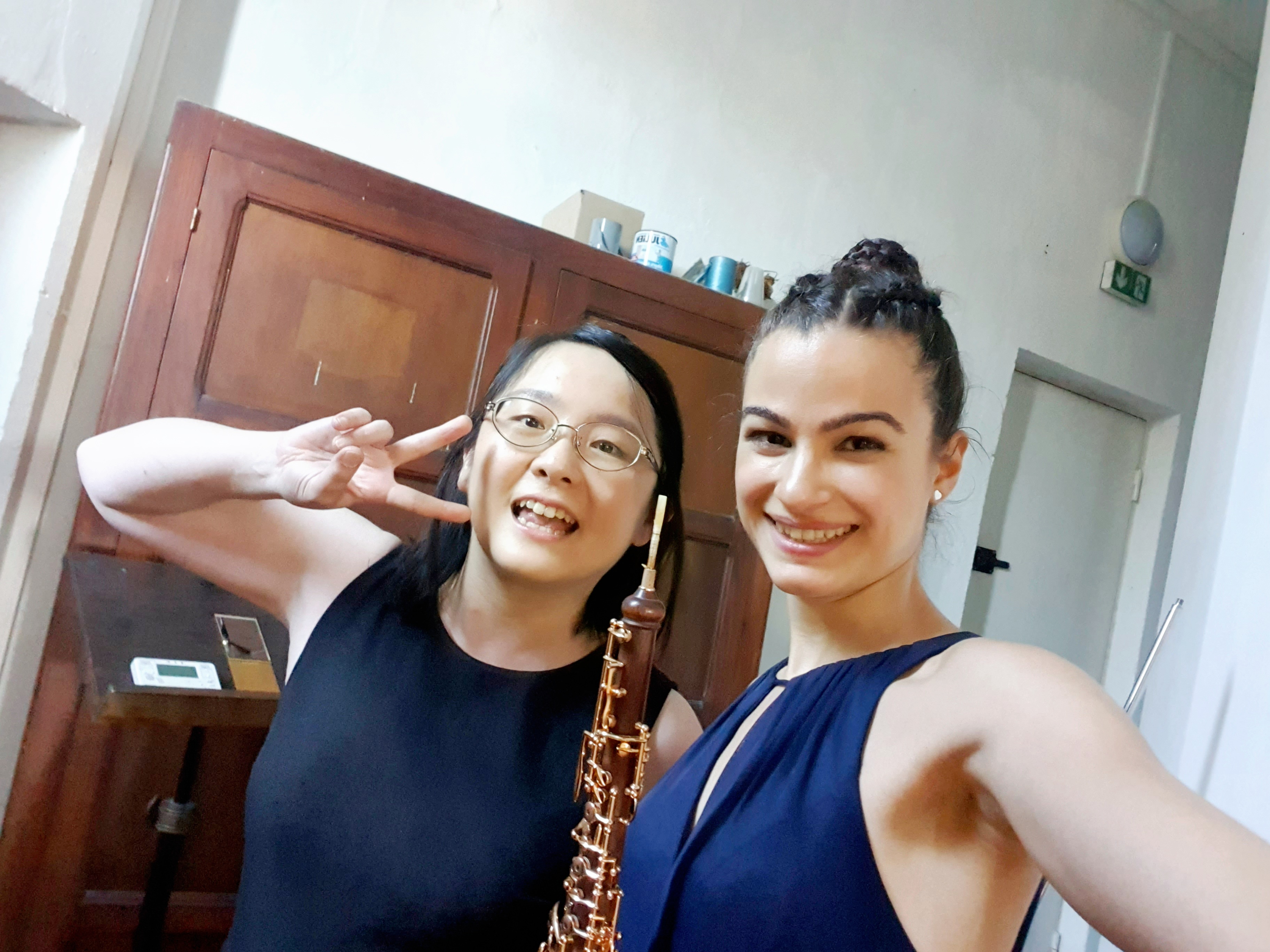 I also was in touch with multiple composers attending the festival. I had valuable conversations and dialogue with them; interactions between young generation of musicians and composers is very important to me, and we all learn something new from the experience. I also got to perform a piece of one of the composers, Aurélien Hallopeau, at his concert.

In the middle of the festival I played my recital at the Young talent concert. I enjoyed so much performing with a great pianist Aoko Soga at such a beautiful chapel and bringing this joy of music and a full spectrum of emotions to the audience. 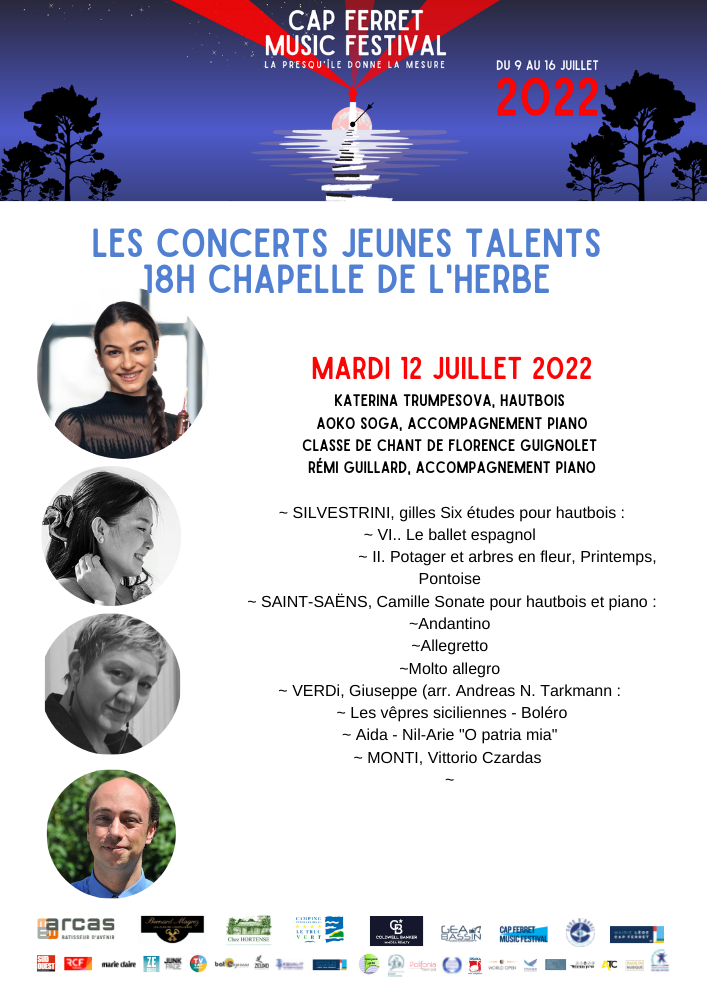 The same evening we enjoyed the beach, sunset and the grand concert right in front of the chapel. I listened to the quintet “Le Bateau Ivre” with fascination! To celebrate such a beautiful day with a successful concert, the next morning I went to look at the sunrise to the beach and enjoy the magical but calm and quiet moment, in contrast to the very social and active days full of music. 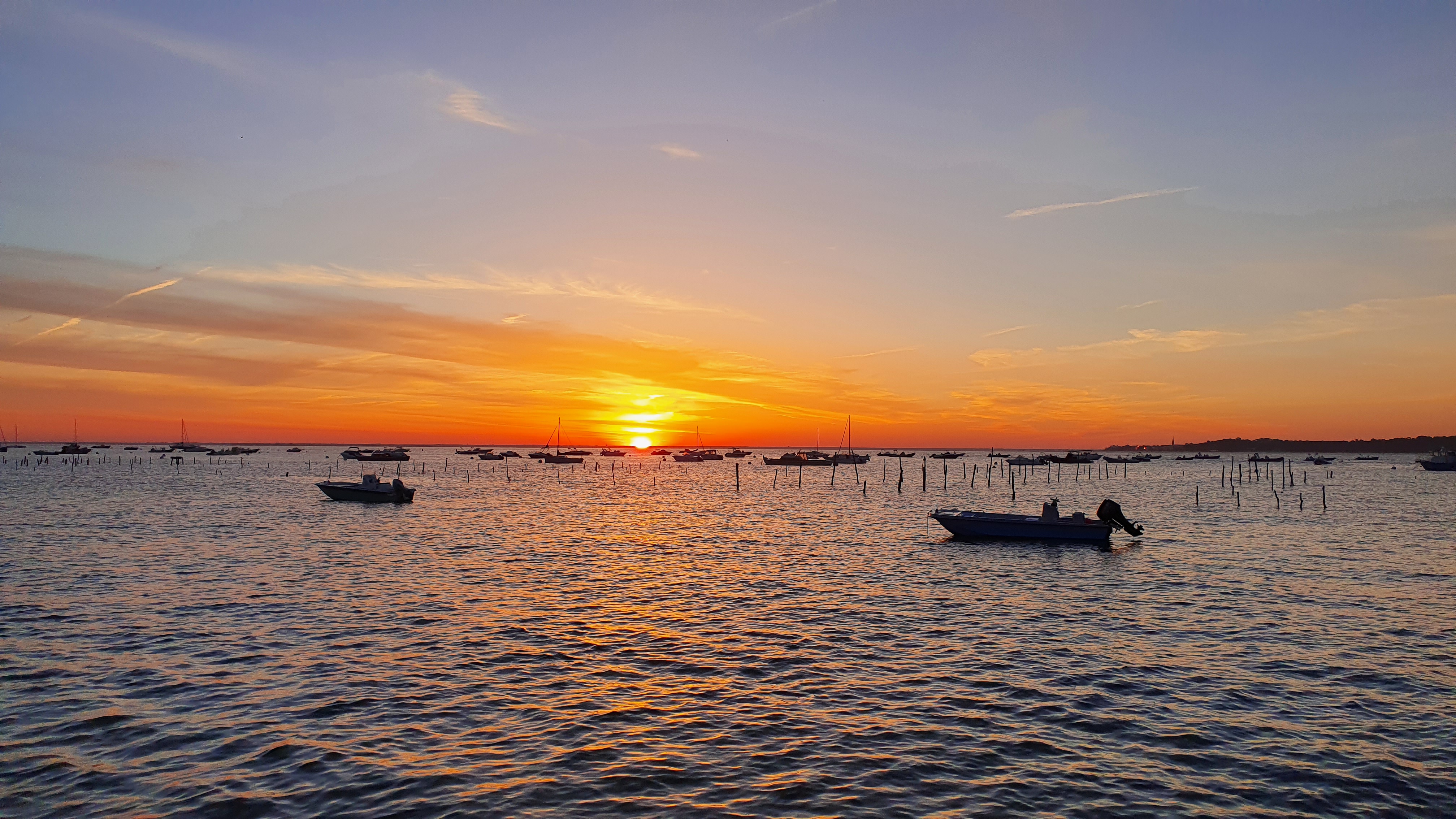 After getting back some balance, I enjoyed the day with a new energy, attending masterclasses, rehearsing chamber music, and more. On that night, when the evening came, I heard the strongest and my most favorite grand concert of the festival: The recital of sopranist Beatrice Uria-Monzon with pianist Marc Olivier Poingt. The emotion they were able to express by music was so strong, that it made my eyestear. I was so thankful for the gift of their music that evening.

The next evening was my last evening at the festival and I was glad I could spend it playing chamber music at the concert. We formed an ensemble with two harps and two flutes, interesting combination! Then the hard part came, saying good bye…

It was a week full of new inspiration, beautiful memories, work, joy, meeting many new people, building musical contacts and friendships and I believe, that some of them will last.

I would like to thank once again to the Prize Fund, Milomir Dojčinović and Helene Berger, thanks to whom I could experience this amazing week!

European Association of Music Educators and Performers & Producer Agency MIR Production with such a distribution of the prize fund helps talented young musicians, some of the winners of the WORLD OPEN MUSIC COMPETITION in promoting their music career, professional growth and opens for them new horizons in the music world.