In 2021, in the “MASTER-PREMIO” category, participants in all nominations competed in 2 ROUNDS, (“JUNIOR” under 18 years old and “SENIOR” from 18 years old). The winners of their nominations participated in the GRAND FINAL.

In the emergency situation in Europe and in the world, as a prize, Vasilisa chose a cash prize for the promotion and development of her creative channel on YouTube, with the help of SMM agencies, which is the most appropriate solution in this situation.

Her YouTube channel reflects the path of a musician from early childhood. The sequence of published videos does not always follow the chronology, but you can see this path in development and in the formation.

In addition to videos with solo performances, the channel presents performances in collaboration with various musicians – instrumentalists and vocalists. And also periodically there are films about composers, performers and musical events. Recently, a new column “Merry Heffalump” has been opened, dedicated to novice musicians.

Vasilisa officially works at the Moscow State College of Musical Performance. F. Chopin  According to the already established tradition, the organizer invites Vasilisa to take part in the work of the jury of the WORLD OPEN Music Competition, in the nomination PIANO ENSEMBLES (accompanist category).

The European Association of Music Educators and Performers & Producer Agency MIR Production helps awardees advance their musical careers and professional growth. In this difficult period for the whole world, the WORLD OPEN Music Competition has become an opportunity for many musicians to express themselves, gain experience and develop in the performing arts.

VASILISA BOGORODSKAYA was born in Moscow. From the age of 4 she studied at the Moscow Secondary Special Music School. Gnessinykh (2000–2009), from the very beginning of her career she performed a lot in various concert halls in Moscow and other cities of Russia.
In parallel (2006–2009), she took lessons at the Central Music School of Moscow from an innovative teacher, laureate of international competitions Kameneva Vera Sergeevna (author of the project “Innovative School of Performing Arts” – https://www.ims.msk.ru/).

Since 2009, she continued her studies at the Children’s Music School at the Moscow State College of Musical Performance. F. Chopin with the Honored Worker of Culture of the Russian Federation Olga Alekseevna Gruzdeva, the successor of the traditions of the outstanding Russian musician Professor Lev Nikolaevich Naumov (1925–2005).

2010 – XVIII Moscow open festival in memory of A.Ya. Flier. Solo is the winner.

2014 – Romantic-fest – 2014 festival of romantic music for young musicians in Moscow. Solo is a graduate student. 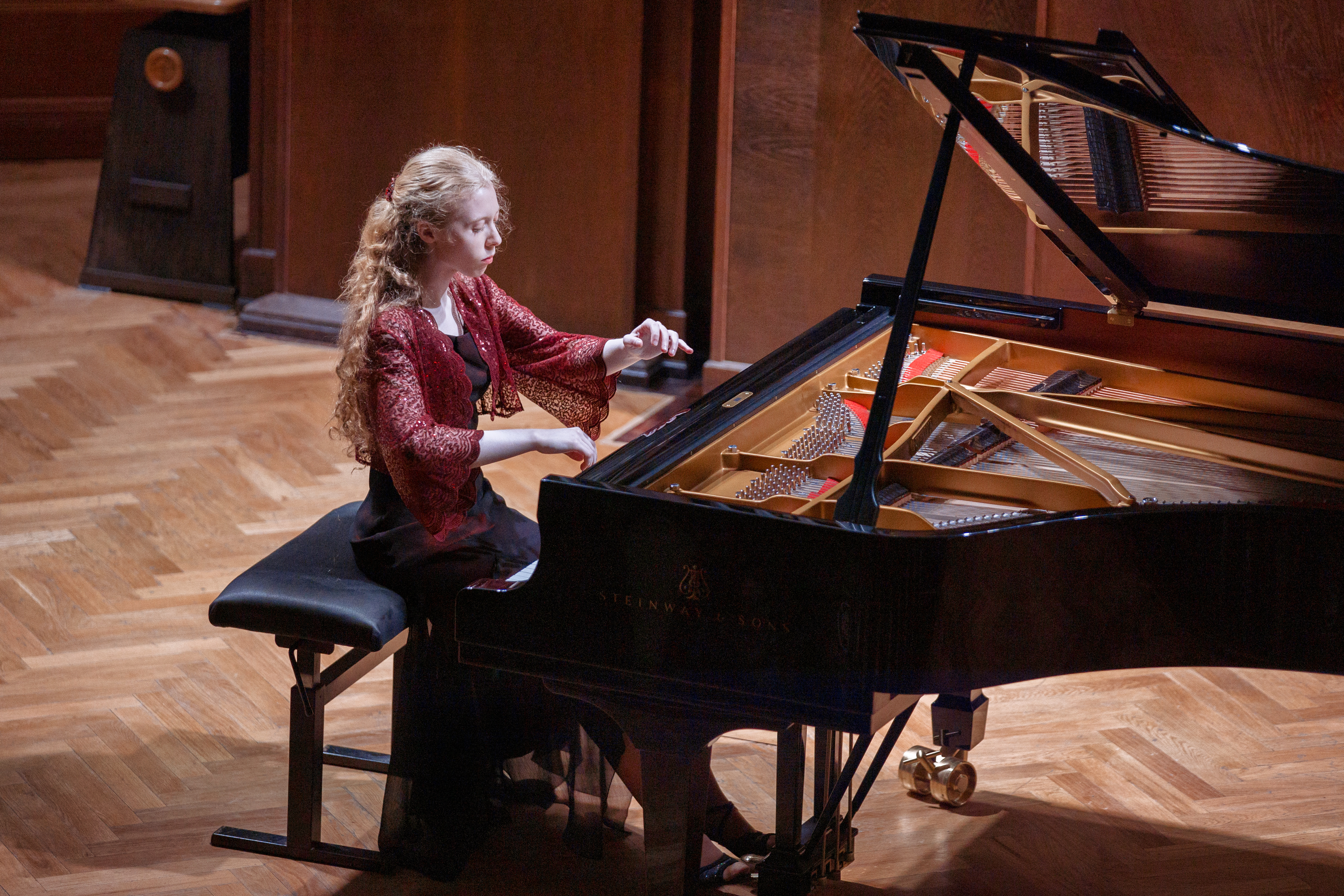 She first performed with an orchestra in 2005 at the age of 8 in the city of Veliky Novgorod.

She repeatedly played at the residence of His Holiness Patriarch Alexy II of Moscow and All Russia (2004–2005).

She gave her first solo concert in 2008 at the age of 12 in the city of Kostroma. The repertoire included works by Bach, Scarlatti, Beethoven, Schumann, Liszt, Chopin, Glinka, Balakirev, Tchaikovsky, Rachmaninov, Shchedrin.

In 2010, she participated in the International Project of the Polish musician and cultural figure Maria Pomianowska “Chopin Without Borders. Enlightenment with Music” – toured as a solo artist and ensemble player (Poland: Warsaw, Mazovia, Zhelyazova Wola). The project involved young musicians from different countries who performed Chopin’s music on various instruments, including the folk instruments of their country.

A regular participant in the projects of the Russian composer Ivan Glebovich Sokolov (born in 1960), a performer of his music.

Currently officially works as an accompanist at the Moscow State College of Musical Performance. F. Chopin

Constantly conducts concert activity as a soloist and as a member of chamber and vocal ensembles.

He has an extensive repertoire of different styles and eras, including works by outstanding composers from the 17th to the 21st century, including composers who have not yet received world fame. The first performer of the work by the Japanese composer Sumio Kobayashi (b. 1982) “Unreal Rain” (2020) and the works of the Russian-Tatar composer Radmir Shaikhutdinov (b. 1991). It includes rarely performed works by famous composers in its programs.