The winner in the nomination VIOLIN and the absolute winner of the INTERNATIONAL MUSIC COMPETITION – Belgrade, Serbia 2017 was Barbara Żołnierczyk from the city of Poznan (Poland).

Contestants in the VIOLIN nomination were evaluated by an international jury from 3 countries (Russia, Serbia, Poland):

In the Masters Final (prize fund $ 2,000) participated 28 contestants, winners in their nominations from 9 countries. Contestants in the MASTERS FINAL nomination were evaluated by an international jury from 5 countries (China, Italy, Russia, Serbia, Poland): 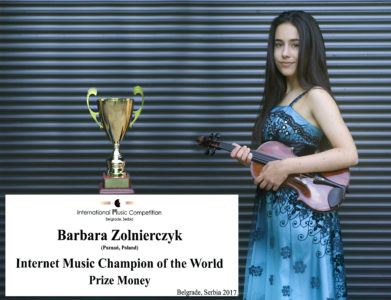 She started playing the violin at the age of 6. Now she is a student of Music High School in Poznan class of Karina Gidaszewska. Currently she is 16 years old and one of the greatest violinists of the younger generation. Despite her very young age she participated in many violin competitions.

Аctively participates in many international music courses. Barbara a multiple grant recipient of the Minister of Culture in Poland and in most of the competitions in which took part won first prizes. Mir Production with such a distribution of the prize fund helps talented young musicians, participants of the International Music Competition – Belgrade, Serbia 2017. In promoting their music career, professional growth and opens for them new horizons in the music world. Poznań is a city on the Warta river in west-central Poland, in Greater Poland region. It is best known for its renaissance old town, destroyed during World War II and then rebuilt, and Ostrów Tumski cathedral. After the second partition of Poland Poznań was administrated by Prussia, and then, with the unification of Germany after the Franco-Prussian War of 1871, the province of Posen became part of the German Empire.

Furthermore, the city of Posen was officially named an imperial residence city, leading to the construction of the Imperial Castle, the Imperial District, the Opera House, new city walls, railway station and many other sites which make a big part of its landmarks to this day. Today, Poznań is an important cultural and business centre and one of Poland’s most populous regions with many regional customs such as Jarmark Świętojański, traditional Saint Martin’s croissants and a local dialect.