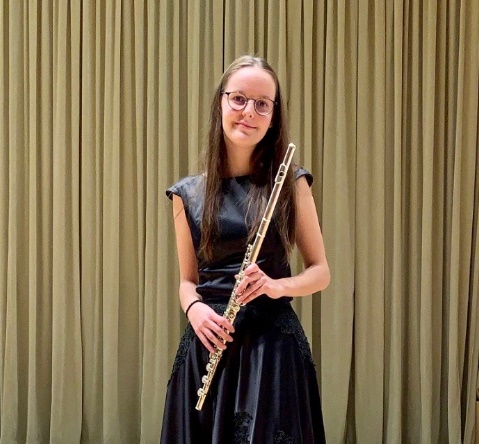 More than 90 participants from 9 countries (Slovenia, Poland, Russia, Turkey, Uzbekistan, Bulgaria, Ukraine, Hungary, Moldova) took part in the Flute nomination, in which Maša won, this year. The jury who evaluated them were from Slovenia, Serbia, Poland and Russia.

They were evaluated by an international jury from 4 countries (France, Russia, Poland, China):

MAЈCEN MAŠA started her musical career at the age of 4 at the music school named after King Pahor Ptuj, and met the flute at the age of 7. Maša studied under Professor Eva Purkeltz, and today she is studying under Professor Irena Rovtar at the Conservatory of Music and Ballet in Ljubljana.

It is very important, even in childhood, to be teached in by the good teachers who instill good taste, a desire to develop and who are open to new trends in the world of art. This is vital. Since the world moves at a very high speed, in order to be an actual performer in the world of music, you need to follow the contemporary trends.

She is 17 years old now. She studies at the Conservatory of Music and Ballet in Ljubljana (Slovenia). This very beautiful city is located between the Mediterranean Sea and the Alps on the banks of the Ljubljanica River. Landscapes, architecture of the city, river, museums of modern art, all this attracts young creative people to the capital of Slovenia. It is not surprising that Masha chose Ljubljana to study; there are many incredible places for creative inspiration.

For a young musician, this is a very interesting and eventful musical life, which opens up new opportunities for a professional career. It was thanks to the experience of participating in such competitions that she was able to show herself, declare herself to the whole world, present herself to the jury of Italy, Croatia, Serbia, Slovakia.

MIR PRODUCTION assists the laureates in advancing their musical careers and professional growth. In this difficult period for the whole world, the International Music Competition – Belgrade, Serbia 2020, which takes place online, has become an opportunity for many musicians to declare themselves, gain experience and develop in the performing arts.