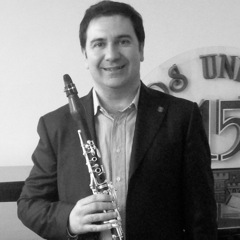 TIMPANI ANTONELLO was born in Rome in 1966, he graduated in Clarinet at the Conservatory “L. Refice “of Frosinone. He furthered his studies at the Accademia Pescarese and at the Musical Campus of Latina, respectively, with Masters Franco Ferranti and Anthony Pay, obtaining certificates of merit.

He was a finalist at the First International Competition of Viareggio, after becoming eligible to audition for the RAI Symphony Orchestra, with whom he has collaborated several times. He performs both as soloist and in chamber groups: has performed at prestigious concert halls in Italy (Sala Baldini, Palazzo Barberini, Aula Magna of the University La Sapienza of Rome, Conservatory of Reggio Calabria, Lamezia Terme Theatre, etc. ..) and abroad (Israel, Czech Republic, Spain, Luxembourg , Lithuania) getting approval from public and critics; He has played in the Work of Igor Stravinsky’s “L’Histoire du Soldat” at the Teatro dei Cocci of Rome ……. “highly suggestive dialogue tacked between the clarinet and bassoon trumpet through a melancholy melody, part seemed almost to despair the soldier.

“G. Bandolfi – Il Messaggero; In recent years he has focused his attention on the contemporary music written for clarinet and piano, performed many premieres of famous composers (T.Procaccini, Ferran Ferrer ,A. D’Antò etc. ..) has to his credit records for the labels De Gemini of Rome and Rugginenti of Milan.

Winner of the First National Contest of Clarinet Music of the Banda della Guardia di Finanza has carried with it numerous concerts in Italy and abroad (Switzerland, USA).

He spends much attention for years to amateur musical bands, trying to spread mainly original music for banda, both as a conductor, as a clarinetist and a composer. It ‘s often invited to be part of committees of national competitions.